In 1990, four chimpanzees; Sunday, Masiko, Jim and Megan were sent from Uganda to Moscow to become local zoo residents only to be hijacked and taken to Hungary. The Jane Goodall Institute-UK rescued them saw to their return to Uganda. Back home, they needed expert help in resettlement.

Through the establishment of the Jane Goodall Institute, the chimpanzees were habituated at Isinga Island Sanctuary. Over the years, this organization has worked with the government and other organizations to promote the conservation of forests and animals that therein stay with a keen interest in chimpanzees. 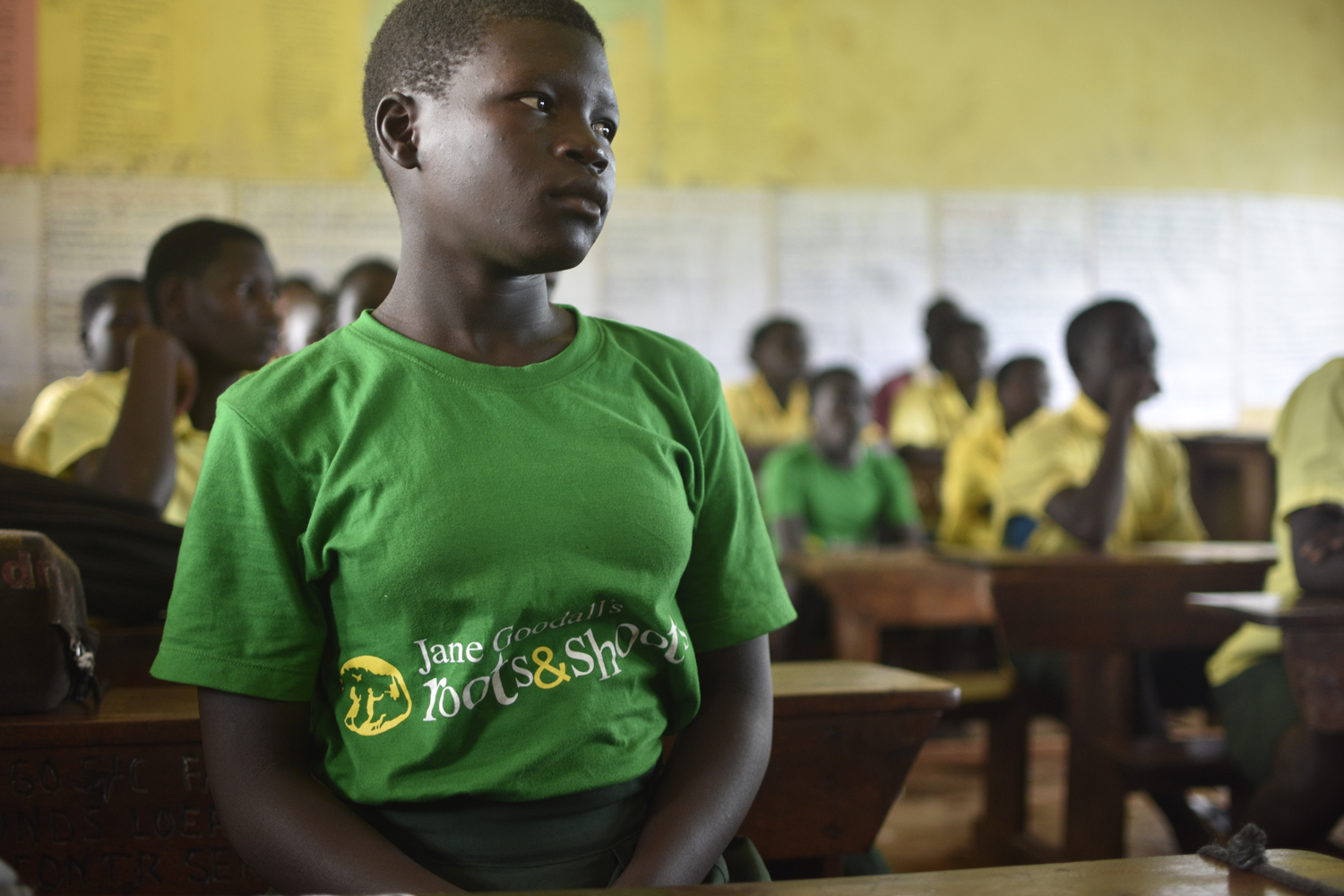 JGI’s main concern has been to sensitize the communities living around the chimpanzee corridors on how to coexist together. The chimpanzee population had drastically fallen due to man’s activities that encroached on their habitat. The leading of all being deforestation. JGI came in and persuaded the locals to take on other economic activities other than relying on the forest for survival.

For example, instead of honey harvesting from the forest, the organization trains the farmers on how bee keeping within their communities for commercial purposes. One of such projects is in the Budongo community in a place called Kapeeka where 40 farmers have formed a cooperative through which they sell honey.

The chimpanzee population had drastically fallen due to man’s activities that encroached on their habitat until the Institute came to the rescue.

Through the Roots and Shoots program that is mainly run in schools, children are taught of the benefits of conservation. Girls are encouraged and equipped to stay in school. Women in communities are taught how to build energy saving stoves other than having to rely on firewood from the forests.

Snare trap wires are used as designs on card covers which are sold off to tourists. A number of people have taken to running nursery beds. The trees are sold off to other farmers to plant their own forests.

27 years later, JGI has a story to tell. The story of conservation is no longer about Jane Goodall, it is about the residents of these communities. The story is about restoration of chimpanzees that were once threatened with extinction. The story today is about men and women interested in planting their own forests on their land.

Jane Goodall, the founder of the Institute

This year, Jane Goodall turns 84. She has not stopped going around the world talking about chimpanzee conservation. She will be in Uganda at a symposium speaking of the same on 8th June 2018.

Related Topics:featured
Up Next

The Soroti Cricket Academy was founded in 2014 with five pioneer cricketers and has since grown to a membership of over 500 players. Founded by Felix Musana, a Certified Public Accountant and passionate cricketer, the academy has supported over 600 young people in Eastern Uganda through cricket, education and youth empowerment programs.

“I was working in Soroti and one day while I was jogging at a public field, I saw five kids playing cricket, 4 girls and 1 boy. They did not have gear and I worried they would get hurt. They had no one to guide them but they were playing anyway. I was impressed, I could not go forward without supporting them. I got them some gear and that made a very big difference for them. That is how it began,” says Musana. “They told their friends who joined the game and within no time, the numbers had increased.”

Having gained an appreciation for the sport at an early age and playing throughout secondary and university, Musana’s passion and love for the game pushed him to start this academy along with three friends, with a dream of harnessing young people’s talent and using the game to empower them to become changemakers. He currently plays for the Soroti Blazers.

To increase its sustainability and recruit more players, the academy works with ten primary schools and six secondary schools in Soroti, Mbale and Lira. They have two professional coaches who take turns training the players in schools. So far, three clubs have been established; Soroti Challengers, Olila girls club and Soroti Blazers and are now competing on the national level.

“We try to introduce cricket at the youngest level in primary and follow through with the players up to university. The youngest players are 8 years old in primary 3.”

Whereas cricket is the backbone of the academy, Musana puts much emphasis on education and youth empowerment as well to ensure a better life for its players who are mostly from rural eastern Uganda.

“We go beyond cricket,” he says. “Most of the young people we work with come from backgrounds with parents that do not believe in education, especially for girls. We mitigate this by talking to the parents to get them an appreciation for education and the opportunities it brings. The people we work with are from rural communities with challenged backgrounds. We realized that if we do not take that extra step, they wouldn’t get much value from playing cricket because many of the players were dropping out of school due to early marriages, drug abuse, pregnancy…”

Through cricket, the academy is empowering young people in rural communities in Eastern Uganda to become change agents. They do radio shows and conduct community programs during school holidays to show how cricket and education are linked.

“While cricket may not be a long-term career, it is a means to a better life for our players. Some have gone up to university level because their tuition is being paid by their patron clubs.”

Many players have received bursaries for secondary education and some university scholarships.

Being a voluntary project, Soroti Cricket Academy faces a multitude of challenges, most associated with resource mobilization. Without governmental support and limited support from the cricket federation of Uganda, there are very many limitations to how much they can do.

“In the beginning, it was only about getting the players equipment, but now we have 2 permanent coaches who scout train all the teams in the schools. Paying them sufficiently and on time is a challenge.”

Because there aren’t any cricket facilities in Soroti, the games can only take place in Entebbe, Jinja and Kampala where cricket ovals are. This excludes most of the players who may not afford transport and accommodation to participate.

Working with the schools too presents a challenge as they are more focused on academic work than sports so convincing the administration to let the students participate becomes difficult. However, inspired by the young player’s talent, he does not give up.

“I am impressed whenever I visit the players and see how talented they are. That keeps me going. Every time we get a chance to play at the national level, they play at their best. The talent, commitment and hard work these young people exhibit and the success they attain keeps me going. All the accolades we win lift my spirit. I can only consider quitting when I know Soroti has a cricket oval. When teams in Kampala come to play in Soroti.”

The future for Soroti Cricket Academy

In its five years of existence, the academy has produced some of the best cricketers in Uganda at the moment such as Joyce Mary Apio, Eloku Esther, Kevin Auro, Alongat Eunice and Apollo Joseph who have received national and inter-school accolades.

“The overall goal is to make Soroti a cricket powerhouse and empower athletes to become community leaders by staying in school.” Says Musana. “Already, one of the clubs, Olila cricket club has claimed its position as one of the best in the country.”

Started a few years ago, local tailoring entrepreneur Harry Patel under his company Tengi Styles has over the years joined the helping hand supporting local communities with emphasis to the girl child and women in the rural areas of Jinja District.

This is all done under the ‘Abaana Abaidho’ Organisation that runs on the ‘Changing a life’ tagline. Through numerous tailored projects, the Foundation is changing the lives of very many young girls, and women in local communities especially in Jinja.

Apart from selling some of the best custom made ‘Bitengi’ that they also deliver in Kampala, Tengi Styles has taken up the mantle to deliver and train girls and women in hands on tailoring skills.

With this initiative, the Company and foundation have not only supported girls and women in tailoring but have also donated sewing machines to these people to enable them utilise the skills they have gained thus offering them an opportunity of earning a living through tailoring and through Tengi Styles that already has a functional client base.

Harry Patel, Founder of Tengi Styles with one of the local football teams they support

The Foundation also engages young children under the school’s kids & community gala where they come together to play soccer/football as well as giving them scholastic materials to enable them go through school smoothly.

Together with local celebrities like Maro and the Brian Umony Foundation, who inspire young people to follow their dreams and use all available resources to better their lives have changed the course of life in rural Jinja

Through the use of fashion to change the lives of the needy and to empower the local person, Abaana Abaidho Foundation is continuously looking forward to create and tailor make programs and projects to better the life of the rural and ultra-poor person.

Who is Harry Patel?

Source: Proud to be a Musoga

Hari Patel aka ‘Waiswa’, from Buwenge, Jinja District, is ‘Proud to be a Musoga’. Hari qualifies as a ‘true’ Musoga, having been born, schooled and still lives in Buwenge. He is fluent in spoken and written Lusoga and loves Jinja.

He is very passionate and active about Busoga and owns a local charity, Abaana Abaidho, that uses football/sport to build confidence and unite the youth, and teaches vocational skills like tailoring.

Disability is not inability: Meet Aisha, a blind hair dresser

In a world full of uncertainties, Malengo Foundation is a living testimony through its Girl 50 50 project that no form of adversity or discrimination is enough to keep a strong woman from achieving her goals.

Aisha Bahati speaking after getting her award

Being blind never stopped Bahati Aisha’s passion for beauty, business and style to blossom. The amazingly talented Aisha has broken barriers to run a successful hair and beauty salon in Kampala and is rising fast to rank among the stylists and fashion influencers despite being blind.

Aisha stood out as Miss Tourism Independent 2015-2016. She is also a makeup artist and cat walked for Malengo Foundation during the Hot Pink fashion show

Girl 50 50 is a Malengo Foundation Campaign mainstreaming the disability normative in gender empowerment. The project decided to honour all the vulnerable ladies who chose to thrive and didn’t let their disability to hinder them from pursuing their dreams.

Aisha was among the 6 remarkable girls and women with disabilities in various fields from Para sports to entrepreneurship that were recognized by Malengo Foundation.

Speaking during the Girl 50- 50 Forum and project launch at Mestil Hotel, Aisha shared her experiences about how blindness has impacted her life and career. The project will encompass a multitude of activities  and interventions throughout the year focusing on the girl child disability rights in an effort to mainstream gender within disability rights.

Aisha was crowned the stylist honoree of 2019 and her award was presented to her by Lady Justice Margeret Oguli Oumo.